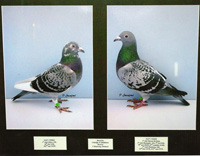 Fred I am really very happy with your Pigeons.

Along these gone nevertheless still just as a thanks the young stud ( Bleu Hen ) which I by means of Orders obtained sale it has super has done he is of you that this stud. , as it happens,
1st finished in the competition which was coupled to these orders sale and with that Flatscreen TV have won and that you are with that also complete gladly because according to the game rules not only the purchaser but also the donor wins same the price.
Therefore also you congratulated and thank for giving a good stud.